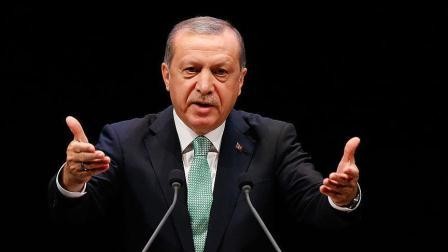 In his speech at an award ceremony at the presidential complex in Ankara on Thursday, Erdogan said: "We are worried that Germany, which has been taking terrorist organizations like the PKK, DHKP-C under its wing, is now becoming a backyard for FETO."

He likened terrorist groups to "scorpions that will sting its carrier frog because it’s in their nature."

"I don’t see the future of Germany -- which receives terrorists with open arms instead of fighting against PKK, FETO, Daesh or racist groups -- well," he said. "Germany has become one of the most important countries that terrorists seek shelter in. I am saying it clearly."

Germany, which hosts a three million strong Turkish community, is among countries where FETO, led by U.S.-based Fetullah Gulen, has a large network with dozens of private schools, businesses and media organizations.

Several important Gulenist figures, including prosecutors and journalists, are believed to have fled from Turkey to Germany.

"I cannot understand at all the remarks of President Erdogan about the security situation in Germany," he told a joint press conference with visiting Estonian Foreign Minister Jurgen Ligi Thursday.

The minister underlined Berlin’s political will to continue close cooperation with Ankara, despite differences on a number of issues.

"Turkey remains an important country in the region in view of the trouble spots in Syria and Iraq. Thus, of course we would like to have good and constructive relations with Turkey," he said.

Steinmeier added that the German government would continue to discuss issues of freedom of expression and press in Turkey, during bilateral talks on various levels.

Relations between Germany and Turkey have been strained in recent months, largely due to Berlin’s reluctance to take strong action against terrorist groups, including FETO and PKK, which carry out activities in Germany.

They are accused of playing a key role in a controversial anti-corruption probe late 2013 that targeted the upper echelons of government.

But Germany’s Justice Minister Heiko Maas said on Tuesday that Berlin would not extradite any suspects if they faced "politically motivated" charges in Turkey.

Germany views Gulenists with suspicion but the group is not outlawed in the country, with the authorities stressing that such a move could only come after concrete evidence of criminality was presented.

The FETO, led by U.S.-based Fetullah Gulen, is accused of orchestrating Turkey’s July 15 coup plot as well as being behind a long-running campaign to overthrow the state through the infiltration of Turkish institutions, particularly the military, police, and judiciary.