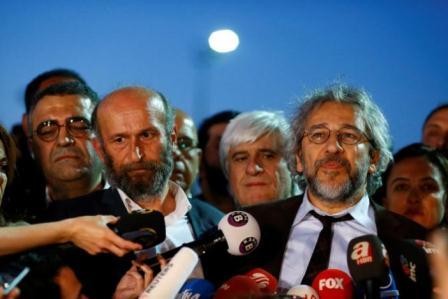 Turkish authorities ordered the formal arrest pending trial on Saturday of nine executives and journalists of a leading opposition newspaper who were detained on Monday.

The detention of the editor-in-chief and senior staff of Cumhuriyet over the secularist newspaper's alleged support for a failed coup in July was described by a top EU politician as the crossing of a red line against freedom of expression. Their homes were also searched.

Istanbul prosecutors have said staff at the paper, one of few media outlets still critical of President Tayyip Erdogan, are suspected of committing crimes on behalf of Kurdish militants and the network of U.S.-based cleric Fethullah Gulen. Turkey accuses Gulen of orchestrating the coup attempt, though he denies any involvement.

Turkey's crackdown since rogue soldiers tried to seize power on July 15 has alarmed Western allies and rights groups, who fear Erdogan is using the coup attempt to crush dissent. More than 110,000 people have been sacked or suspended and 37,000 arrested over the past 3-1/2 months.

Opposition groups say the purges are being used to silence all dissent in Turkey, a NATO member which aspires to membership of the European Union.