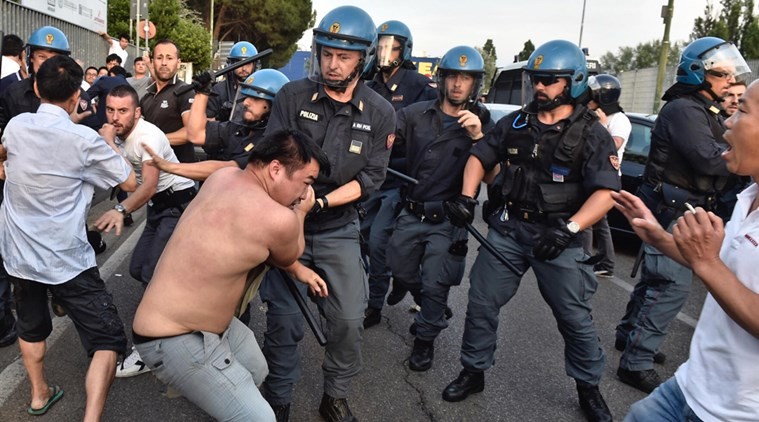 Hundreds of hooded anti-government protesters clashed with police in Florence on Saturday just weeks before a referendum on a constitutional reform on which Prime Minister Matteo Renzi has staked his political future.

There have been protests against the Renzi government and the referendum before, but these were the first involving violence.

The young protesters were marching through the centre of Florence trying to reach the premises where 41-year-old Renzi, also a former mayor of the Tuscan city, was expected to attend his Democratic Party’s annual convention called "Leopolda".

Television pictures showed officers in riot gear and with batons charging hundreds of protesters who threw smoke bombs, stones and firecrackers and tried to separate from the police by dragging metal fences into the streets. One officer was hurt in the leg during the clashes, Italian media said.

Florence mayor Dario Nardella condemned the protests after crossing the demonstrations to reach the Leopolda venue.

"Demonstrating is a right, but the use of violence is despicable and unacceptable," he told his fellow party members from the podium.

With four weeks to go to the Dec. 4. referendum on his plan to reduce the role of the Senate and cut the powers of regional governments, Renzi is campaigning furiously to try to turn around opinion polls that suggest he may lose the vote.

During the unauthorised protests, campaigners were holding up "No to Renzi" and "No to Leopolda" banners, challenging the proposed constitutional reform which they said would reduce democracy and lead to an excessive concentration of power.

Out of the last 33 opinion polls, only one put the "Yes" camp ahead.