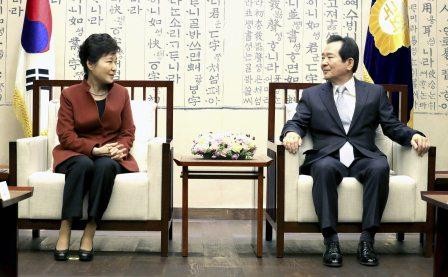 President Park Geun-hye of South Korea on Tuesday asked rival political parties to recommend a new prime minister, making a major political concession in her efforts to defuse an influence-peddling scandal that has crippled her government for weeks.

During a meeting with Chung Sye-kyun, the speaker of the National Assembly, Ms. Park made the proposal, essentially retracting the appointment, made six days ago, of her own candidate for prime minister. That candidate, Kim Byung-joon, was rejected by the opposition parties who together control a majority in Parliament.

Instead, they demanded that Ms. Park cede some of her presidential policy-making power, especially in economic and other domestic issues, to a prime minister recommended by Parliament. (In the meantime, Prime Minister Hwang Kyo-ahn, whom Ms. Park had wanted to replace with Mr. Kim, remains in office.)

The concession was another political blow to Ms. Park, and new evidence of her much-diminished political authority as the scandal continues to unfold. She has tried to regain public trust by reshuffling her cabinet and presidential staff.

Despite such efforts, surveys showed that she had become the least-popular president since South Korea moved to democracy in the late 1980s. On recent weekends, tens of thousands took to the streets calling on her to step down.

In the past week, prosecutors have arrested Choi Soon-sil, a friend of Ms. Park’s for 40 years, on charges of using her influence with the president to extort $69 million from big businesses in the form of donations to two foundations she controlled. Two former presidential aides of Ms. Park were placed under arrest on charges of helping Ms. Choi with her plans or providing her with confidential government documents for her reviewing.

The scandal involving Ms. Choi was particularly inflammatory in South Korea, partly because of her background.

She is the daughter of a religious cult leader named Choi Tae-min who befriended Ms. Park in the mid-1970s, when Ms. Park’s father, Park Chung-hee, a military dictator, was still in power.

Mr. Choi, a shadowy figure with several pseudonyms, was believed by many to have exercised a Rasputin-like power over Ms. Park and to have used it to collect bribes. He died in 1994.

After Ms. Park took office as president in early 2013, rumors persisted that Ms. Choi exerted an undue influence on Ms. Park, who had few relatives or friends she could trust, to meddle in government affairs, installing her associates in the government and helping them win large government contracts.

Some of those suspicions seemed to be vindicated on Oct. 25, when Ms. Park acknowledged that she had let Ms. Choi edit some of her most important speeches. Ms. Park later also apologized for letting her guard down on Ms. Choi and failing to prevent what has been alleged to be her influence peddling.

Prosecutors said Tuesday that they had raided the offices of Samsung, South Korea’s largest conglomerate, to look for evidence that the business had provided illegal financial support for Ms. Choi’s daughter, who is an equestrian.