IS leader appointed his deputy to take over after his death 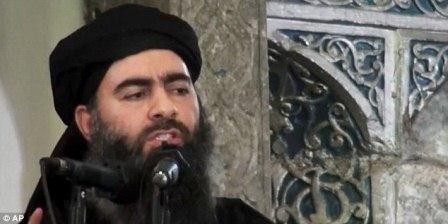 Islamic State's leader Abu Bakr al-Baghdadi has privately revealed he fears he will be killed in Mosul and has appointed his first deputy to take over when he dies.

A source, who insisted on anonymity, said the terror group's media networks had been circulating the 'unprecedented' decision.

The identity of the potential future leader will be kept under wraps amid fears it could cause revolts within ISIS.

Not even the terror group's senior leaders were allowed to discuss al-Baghdadi's successor, the source told Iraqi News.

The announcement comes as coalition forces tighten their grip on Mosul as Iraqi troops have reclaimed chunks of the city.

Flames and smoke were seen rising from a burning oil facility in the town of Qayyarah, near Mosul.

Oil wells in and around the town were torched by ISIS extremists as the Iraqi military began an offensive to liberated the town.

For two months the residents of the town have lived under an almost constant smoke cloud, the only respite coming when the wind changes.

Those in the town, despite having been freed from ISIS occupation, now live with little power, a water supply tainted with oil that only comes on periodically and an oppressive cloud of smoke that coats everything with thick soot.

Many complain of respiratory problems, but the long term health implications for the men, women and children living in the town have yet to be seen as al-Baghdadi's ISIS and coalition forces continue to battle for the land.

The mysterious leader of Islamic State Abu Bakr al-Baghdadi has been reported to have been killed or seriously injured at least 10 times in the last year and a half.

His evasiveness led to the US Government sticking a $10million bounty on his head for anything that would lead to his capture or death.

It turned up nothing, though it is understood that after 13 years as an active terrorist he is cornered in Mosul as the battle continues to liberate the city.

Unlike other leaders of huge terror groups, such as Osama Bin Laden, ISIS head honcho prefers to stay under the radar.

He has only appeared in one video - in Mosul last year - and there are only two authenticated photographs of him.

This ability to go undetected coupled with his alleged likening for wearing masks when addressing his commanders has earned him the nickname The Invisible Sheikh.

There is good reason for his incognito way of life.

In 2006, one of his predecessors and leader of vicious jihadist group in Iraq Abu Musab Al-Zarqawi was tracked down and was killed in a US bombing raid in 2006.

Zarqawi, like Al-Qaeda's Bin Laden, was a showman, and it caught up with him.

Baghdadi is credited with transforming the breakaway Al-Qaeda group turning it into the independent ISIS group that is arguably the most powerful and wealthiest jihadist organisation in the world.

He started life as Ibrahim Awad Ibrahim and is thought to have been born in Samarra, north of Baghdad, in 1971.

Though there is no official confirmation, he is understood to have gained a doctorate from a university in Baghdad having read Islamic studies.

His classmates described him as a shy, unimpressive religious scholar and a man who abstained from violence.
But by 2003, he was a fully-fledged jihadist, living in a small room attached to mosque.

He had called this his home for a decade.