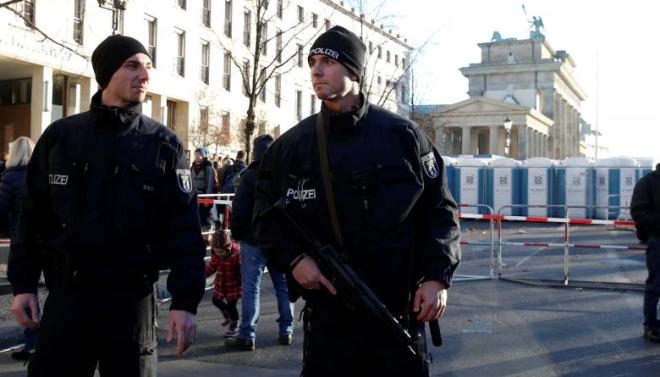 In the German capital, police closed the Pariser Platz square in front of the Brandenburg Gate and prepared to deploy 1,700 extra officers, many along a party strip where armored cars will flank concrete barriers blocking off the area.

"Every measure is being taken to prevent a possible attack," Berlin police spokesman Thomas Neuendorf told Reuters TV. Some police officers would carry sub-machine guns, he said, an unusual tactic for German police.

Last week's attack in Berlin, in which a 24-year old Tunisian ploughed a truck into a Christmas market, has prompted German lawmakers to call for tougher security measures.

In Milan, where police shot the man dead, security checks were set up around the main square. Trucks were banned from the centres of Rome and Naples. Police and soldiers cradled machine guns outside tourists sites including Rome's Colosseum.

Madrid plans to deploy an extra 1,600 police on the New Year weekend. For the second year running, access to the city's central Puerta del Sol square where revellers traditionally gather to bring in the New Year will be restricted to 25,000 people, with police setting up barricades to control access.

In Cologne in western Germany, where hundreds of women were sexually assaulted and robbed outside the central train station on New Year's Eve last year, police have installed new video surveillance cameras to monitor the station square.

The attacks in Cologne, where police said the suspects were mainly of North African and Arab appearance, fueled criticism of Chancellor Angela Merkel's decision to accept nearly 900,000 migrants last year.

The Berlin attack has intensified that criticism.

In Frankfurt, home to the European Central Bank and Germany's biggest airport, more than 600 police officers will be on duty on New Year' Eve, twice as many as in 2015.

In Brussels, where Islamist suicide bombers killed 16 people and injured more than 150 in March, the mayor was reviewing whether to cancel New Year fireworks but decided this week that they would go ahead.