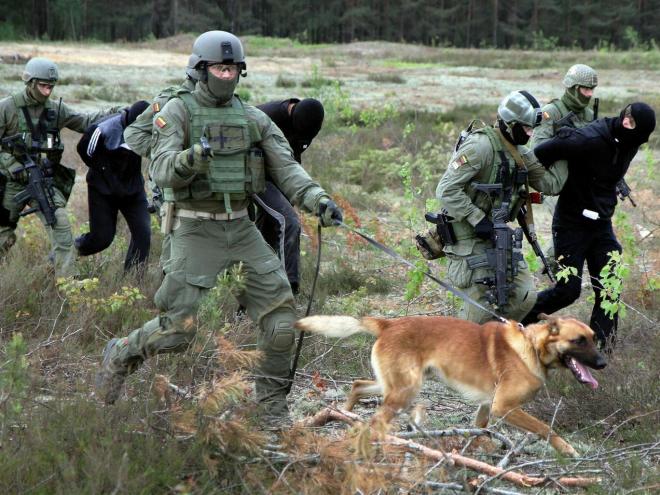 US Special Forces have been deployed close to the border with Russia as part of a “persistent” presence of American troops in the Baltics.

Dozens of special ops solders are being stationed along Europe’s eastern flank to reassure Nato allies Latvia, Lithuania and Estonia.

The move will also allow the US to monitor Russian manoeuvres amid fears of further destabilisation following its annexation of Crimea in 2014.

Lithuanian defence ministry spokeswoman Asta Galdikaite confirmed the US had offered “additional safety assurance measures to the Baltic countries following the deterioration of the security situation in the region”.

The troops will also help train local forces and add to intelligence gathering operations carried out by the CIA.

Eastern European countries neighbouring Russia fear an incursion similar to that launched in 2014 in Crimea and eastern Ukraine, where fighting continues.

The Lithuanian President’s office released a statement saying the US was playing an “active role” to “provide the most reliable security guarantees for the Baltic states and for the whole transatlantic community”.

However, Russia views the build-up of NATO troops in the Baltics as a provocation and has said the main barrier to warm relations with the West is America’s continued military presence there.

US special operations forces will complement around 4,000 Nato troops posted to Poland, Lithuania, Estonia and Latvia in the coming months.

The deployment – the largest on Russia’s doorstep since the Cold War – was criticised as “truly aggressive” by Moscow.

Russia had “every sovereign right to take necessary measures throughout the territory of the Russian Federation”, a statement from the Kremlin added.

Britain will send an 800-strong battalion to Estonia, supported by French and Danish troops, beginning in May.

Elsewhere, Canada is sending 450 troops to Latvia and Germany is sending up to 600 soldiers to Lithuania.