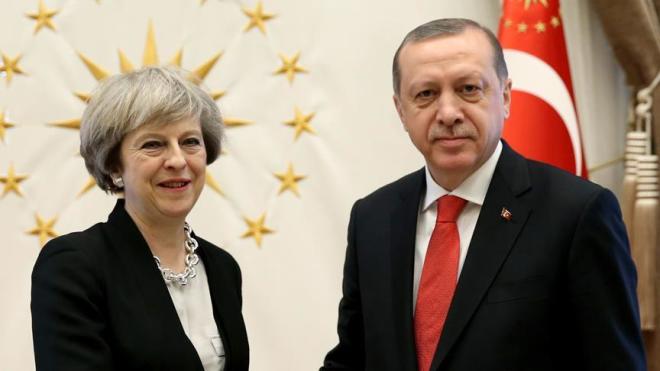 Turkey wants a different approach in its cooperation with the U.S.-led coalition forces in the region, President Recep Tayyip Erdogan said on Saturday.

Addressing a joint press conference with British Prime Minister Theresa May at the presidential complex in Ankara, Erdogan said: "May’s visit is very important for Turkey and the U.K. in terms of Syria and Iraq.

“We want to have a different approach towards the cooperation between coalition forces and Turkey."

Turkey launched Operation Euphrates Shield in late August 2016 in northern Syria to tighten its border security, eliminate the terror threat along its borders, and support opposition forces in the region.

The Turkey-backed Free Syrian Army (FSA) forces fight both Daesh as well as the terrorist PKK's Syrian offshoot PYD, which the U.S. considers a "reliable partner". This difference in views has been a tension between Turkey and the U.S.

Since the U.K. announced its decision in a referendum in 2016 to part ways with the EU, critics have warned the U.S.-led coalition forces fighting Daesh in Syria and Iraq may also get adversely affected by this change.

May, who is on her first official visit to Turkey as prime minister, also discussed the recently-held Astana talks as well as the upcoming Geneva talks at the end of February, both of which aim to find a political solution in Syria.

Astana talks were brokered by Turkey, Russia and Iran, whereas the Geneva talks will take place under the auspices of the UN.

The British premier also said Turkey and the U.K. were trying to create conditions for "peace" as well as continue their fight against Daesh in Syria.