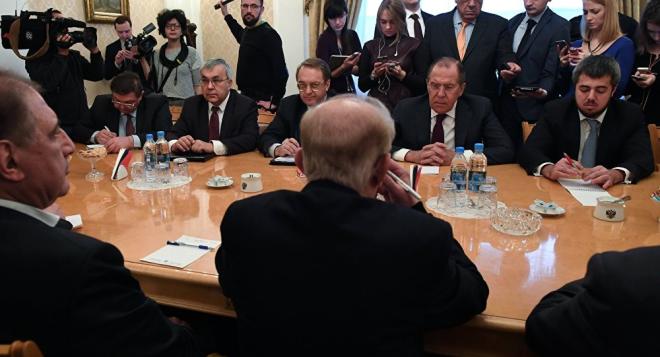 Negotiators from Syria's government and opposition traded insults on Friday, calling each other "terrorists" and "adolescents" after an eight-day round of peace talks in Geneva.

Axar.az reports that the two sides do not meet but negotiate via U.N. mediator Staffan de Mistura, saving their liveliest invective for the TV cameras after each meeting with him.

Opposition negotiator Nasr al-Hariri said the "terrorist regime" of President Bashar al-Assad had refused to discuss political transition during the talks and said Assad was a war criminal who must step down in the name of peace.

"They are solely discussing their empty rhetoric about countering terrorism," Hariri told reporters, vowing there could be "no peace without justice."

"War crimes and crimes against humanity must not be an option for negotiations. From now, venues must be found for transitional justice to ensure holding the perpetrators accountable," he said.

Hariri said he was looking for a negotiating partner who put the interests of the Syrian people first, while his opposite number, the government's chief negotiator, Bashar al Ja'afari, said he only wanted to negotiate with someone "patriotic".

Ja'afari mocked the opposition delegation as "adolescents" who thought they were appearing on a television talent show such as "Arab Idol" or "The Voice", and were under the illusion that government would simply hand over the keys to the country.

"In fact they are tools, they are mercenaries in the hands of their lords, their operators, and it seems they have not received instructions from them, except instructions to continue supporting terrorism and to create havoc in these rounds."

Ja'afari said his delegation had given de Mistura documents on all aspects of talks - on elections, constitution, reformed governance and countering terrorism - but the opposition had not responded.

The Geneva talks, which began fitfully last year before being drowned out by the escalating war, were originally backed by the United States and Russia. While Russia is widely seen as holding the balance of power, the United States has backed away from its previous overt support for the rebels.

Ja'afari said Haley was new and needed time to "digest and metabolize" the reality of the Geneva talks and complementary ceasefire talks in Astana.

"The future of Syrians will be determined only by the Syrians, not by the U.S. or any other ambassador," he said.