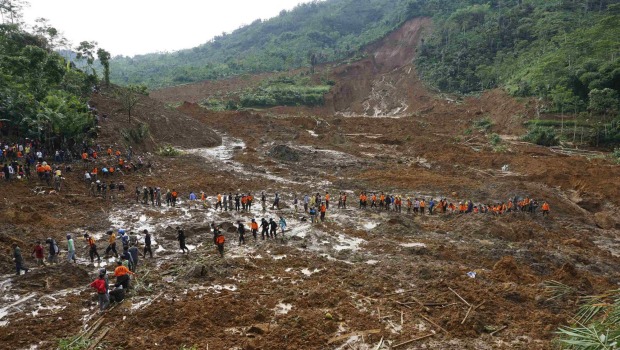 More than two dozen people were reported missing on Saturday after a rain-triggered landslide struck a village on Indonesia's main island of Java.

The landslide hit up to 30 houses and farmers harvesting ginger on a hillside in Banaran village in East Java province's Ponorogo district, said Sutopo Purwo Nugroho, the spokesman for Indonesia's Disaster Mitigation Agency.

The local mitigation agency said 27 people were buried, while a local army chief put the number of missing at 38.

He said difficulties in accessing the disaster site were hampering rescue efforts.

The local army chief, Lt. Col. Slamet Sarijanto, said that according to villagers, 22 people were buried within houses and 16 while harvesting ginger.

The landslide overturned vehicles, shattered and buried buildings, and left a massive scar on a hillside where lush vegetation had been torn away.

Seasonal rains cause frequent floods in Indonesia, the world's largest archipelago nation, where many of the country's 256 million people live in mountainous areas or fertile, flood-prone plains near rivers.