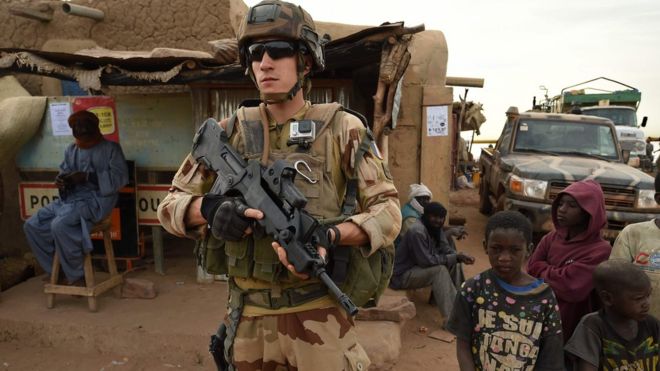 A French soldier was killed in Mali after a clash with armed militants, French President Francois Hollande's office said on Thursday, highlighting instability in the west African state which is vulnerable to attacks from jihadist groups.

"The president has learned with great sadness of the death of a (soldier) ... following a clash with terrorists during an operation in the southeast of the country," Hollande's office said in a statement.

The Sahel region with its huge expanse of remote desert is home to several jihadist groups. The area saw several armed attacks on targets inside neighboring Burkina Faso and Ivory Coast last year.

France intervened in Mali four years ago to drive out al Qaeda-linked militants who hijacked a rebellion in 2012 by ethnic Tuaregs and attempted to take control of the central government in Bamako.

The former colonial power has since spread some 4,000 soldiers across the region, known as the Barkhane force, to hunt down Islamists, while United Nations' peacekeepers have also been deployed to ensure Mali's stability.

France redeployed about 1,000 troops to Mali's Gao region to tackle renewed violence there after almost 80 people were killed at a military camp in Gao in January. That attack was claimed by al Qaeda's North African wing which said it wanted to punish groups cooperating with France.

Defence Minister Jean-Yves Le Drian said the soldier, the 19th to be killed since Paris' intervention, had died during a joint operation with Burkinabe and Malian forces on Wednesday afternoon near Hombari on Mali's southwestern border.

He said the troops were attacked after an explosive device blew up an armored vehicle, with the soldier killed in the ensuing clash.

French Foreign Minister Jean-Marc Ayrault, due in Gao on Friday with German counterpart Sigmar Gabriel, is undertaking a two-day trip to the region, as part of a move to boost regional counter-terrorism efforts and find ways for the various parties involved in Mali to stop the violence.