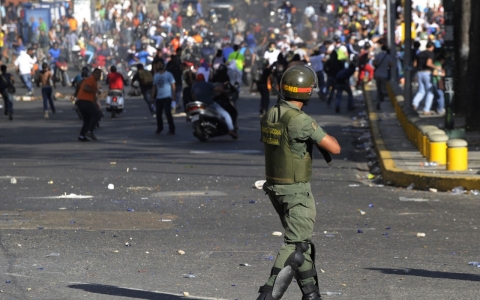 Protesters threw rocks and Molotov cocktails at police, who responded with tear gas and rubber bullets, in the capital city, Caracas, on Saturday.

At least 17 people were treated for injuries, according to Ramon Muchacho, a Caracas-area mayor.

The protest rally in the capital came after the government on Friday barred Capriles from running for office for a decade and a half over alleged “administrative irregularities” during his term as the governor of the northern state of Miranda, his current office.

“Nobody can disqualify the Venezuelan people,” Capriles said, addressing the protesters from a stage during the Saturday rally.

A group of protesters unsuccessfully tried to storm a Supreme Court office building and torch it. As night fell, youths burned trash and tore down street signs in eastern Caracas.

The opposition has called for another protest on Monday.