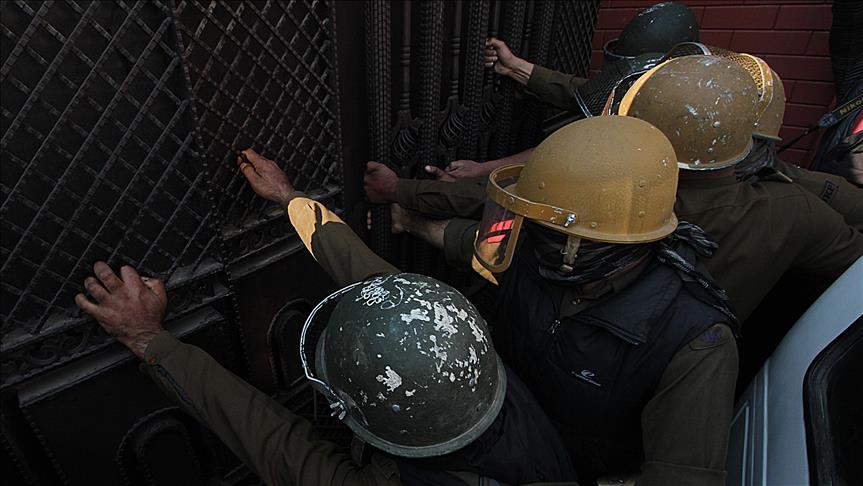 An Indian spy agency raided the offices and homes of several pro-independence activists affiliated with resistance groups in Jammu and Kashmir on Saturday, according to Indian media.

Altaf Ahmad Shah, son-in-law of senior Kashmiri Syed Ali Shah Geelani, and Mushtaq Ahmad Chaya, district president of Hurriyat Raja Mehrajudin, were among those said to be affected by the raids.

Times of India quoted the National Investigative Agency (NIA) chief Sharad Kumar as saying that raids were carried out at “22 locations, including 14-15 in Kashmir and seven in [Indian capital New] Delhi since early Saturday morning".

The outlet said the agency personnel also recovered cash worth over $200,000 -- a claim that was rejected as a bid to distract the world from the ongoing pro-independence movement in the disputed region.

The raids were being conducted to cut alleged financial and other links between the Kashmiri resistance leaders and Pakistan, according to National Investigative Agency.

The Kashmiri leadership, however, termed the entire exercise by NIA a farce.

"While the Indian army chief and parliament members are openly calling for killing Kashmiris, they are at the same time creating further ground to justify the slow genocide that they are doing in Kashmir," senior Kashmiri leader and Hurriyat (M) Chairman Mirwaiz Umar Farooq told Anadolu Agency.

He confirmed that residences and offices of his party members, including Shahid-ul-Islam had been affected by the raids.

Meanwhile, Indian Home Minister Rajnath Singh on Saturday refused to condemn the use of civilians as human shields by the Indian army in the disputed Kashmir.

While addressing a press conference, Singh said that he was in "total agreement" with Indian Army Chief Gen. Bipin Rawat that the “dirty war” in Kashmir had to be fought through innovative ways such as use of human shields.

Human rights campaigners recently widely condemned the Indian army for using young Kashmiri man as a human shield by tying him at the front of military jeep. Viral videos of the incident show the young man being taunted by soldiers.

Rawat had also said that Kashmiris had supposedly stopped fearing the Indian Army, a situation that he added must be rectified.

Kashmiri resistance groups in Jammu and Kashmir have been fighting against Indian rule for independence, or for unification with neighboring Pakistan. More than 70,000 people have reportedly been killed in the conflict since 1989. India maintains more than half a million troops in the disputed region.