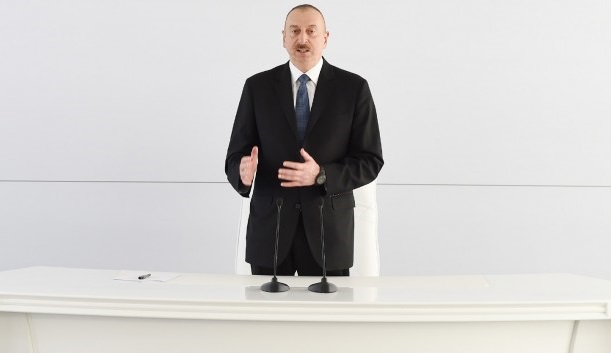 About 30 defense industry plants operate in Azerbaijan and the Armed Forces is largely being equipped with local products, Azerbaijan’s President Ilham Aliyev said on Friday.

The president made the remarks at the opening ceremony of a plant of the Defense Industry Ministry’s “Sharg” Production Unit for the production of components for 40x46 mm MSGL 40-type grenade launchers in country’s Shirvan city.

“We’re here for the opening of these new defense industry plants on the eve of this wonderful holiday. This is a remarkable event. The Ministry of Defense Industry was established upon my order in December 2005 and has been quite successful since,” he said.

"At the time, the establishment of the ministry allowed us to provide ourselves with a great deal of military equipment and weapons. We did not have great opportunities in those years. We were dependent on foreign manufacturers; sometimes we could obtain some weaponry, and sometimes we couldn’t. Therefore, the main purpose of the Ministry of Defense Industry was to reduce dependence on imports, create new jobs and provide the Azerbaijani Armed Forces with modern equipment and weaponry. Today's achievements and reality show that we have achieved our goal,” President Aliyev added.

The head of state noted that about 30 defense industry plants operate in Azerbaijan and the Armed Forces is largely being equipped with local products.

“Over the course of these years, the production of more than 1,200 types of military products has been fixed. Azerbaijan has managed to maintain its worthy place in this area on a global scale,” he said.

The president stressed that a powerful military industrial complex has been created in Azerbaijan. “We have several military facilities operating in Shirvan. Nearly 1,200 people are employed at enterprises in Shirvan alone," he added.

He underlined that Azerbaijan is now among the world’s leading countries with its military-industrial complex.