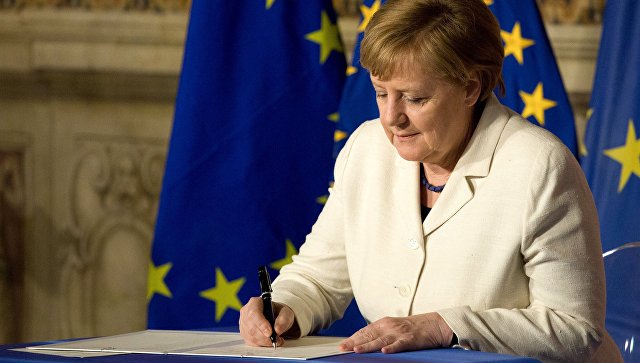 The collapse of preliminary talks about the establishment of a coalition government puts "great challenges before the political parties," German President said on Monday.

Axar.az informs citing Sputnik that The breakdown of political negotiations to form the next government has left Germany facing an unprecedented situation, German President Frank-Walter Steinmeier said after meeting with Chancellor Angela Merkel at Bellevue Palace on Monday.

"Eight weeks since the Bundestag elections, talks to form a new government have so far failed to yield results. We are now facing a situation that has never happened before in the history of the Federal Republic of Germany, that is for almost 70 years," Steinmeier said.

The German President called on participants in the talks to redouble their efforts to come to an agreement.

"This is the moment in which all participants must pause and rethink their position. All political parties elected to the Bundestag must act for the common good. I expect from the negotiators a demonstration of readiness to form a government in the foreseeable future," the president stressed.

After talks broke down on Sunday due to a disagreement between the Greens and the classically liberal Free Democratic Party (FDP). The other two participants in the talks are Merkel's center-right Christian Democratic Union (CDU) and its Bavarian sister party, the Christian Social Union. (CSU).

Earlier on Monday the German Free Democratic Party (FDP) announced its withdrawal from the coalition talks with the union of the Christian Democratic Union of Germany (CDU) and Christian Social Union in Bavaria (CSU) and the Greens (prospective 'Jamaica coalition'). However, disagreements over such issues as migration and climate change have prevented parties from reaching a deal. AfD leader Alexander Gauland has already called for Chancellor Angela Merkel to resign.

The CDU/CSU bloc could agree to form a minority government with the Greens. If no government is formed, a new parliamentary election will have to be scheduled.