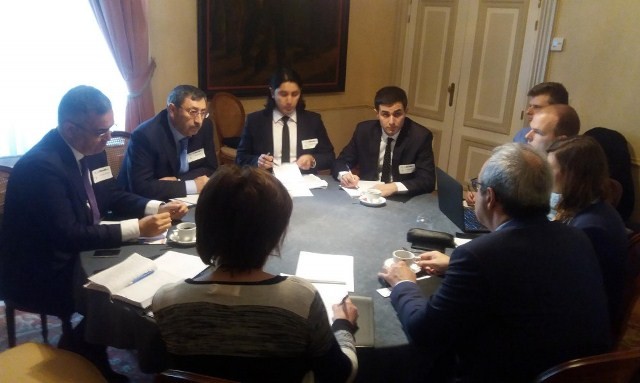 Brussels hosted bilateral consultations between Azerbaijan and Belgium, on April 14. Within the framework of these consultations, Azerbaijani Deputy Foreign Minister Khalaf Khalafov visited Ministry of European Affairs and the Belgian Federal Parliament.

High-ranking officials of the Ministries of Foreign Affairs and European Affairs of Belgium attended the meetings.

The meeting discussed current state of and prospects for relations between Azerbaijan and Belgium, in this regard, exchanged views on the issues as implementation of bilateral high-level visits in the coming period, economic relations, consulate, fight against terrorism, energy cooperation, Armenia-Azerbaijan, Nagorno-Karabakh conflict, Azerbaijan-EU relations, also international and regional problems.

On behalf of the Government of Azerbaijan, Khalaf Khalafov, expressed condolences in connection with the deaths of many people, as a result of terrorist acts committed on 22 March in Brussels and emphasized Azerbaijan’s support to Belgium in the fight against terrorism.

The deputy foreign minister also informed about the international and regional energy and transport projects being implemented on the initiative and participation of Azerbaijan, recalling the representing of Belgian Fluxsus company with 19.6 percent share in TAP Project. Mr. Khalafov noted great potential of representation of Belgian companies in Azerbaijan.

Appreciating consultations, the Belgian side stressed that it would contribute to further development of the existing cooperation, as well harmonization of positions on regional and international issues. They also expressed support to negotiations on the strategic partnership agreement between the EU and Azerbaijan.

Following the discussions, the sides agreed to hold such bilateral consultations every two years in Baku and Brussels.

Azerbaijani deputy minister informed about formation of a Working Group of 13 MPs on Azerbaijan-Belgium inter-parliamentary relations in Azerbaijani Parliament, that proposes to hold exchange of visits between the parliaments of both countries.

Mr. Dirk Van Der Maelen said that there is a need to strengthen inter-parliamentary relations between the two countries and expressed his full support for this initiative.

At the meeting, Khalaf Khalafov highlighted the Armenia-Azerbaijan, Nagorno-Karabakh conflict, latest incidents in the frontline and called Belgian MPs to refrain from trips to Azerbaijan's occupied territories.