Theresa May to visit Germany for crisis Brexit talks 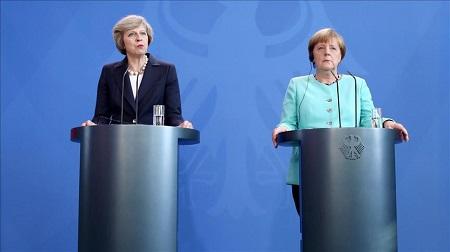 Germany’s chancellor will host Britain’s prime minister Tuesday in Berlin to discuss the latest developments on Brexit, her office said.

“Upon a request from the British side, Chancellor Angela Merkel will meet British Prime Minister Theresa May on Tuesday at 13:00 hours,” spokesman Steffen Seibert said.

On Monday, May announced the postponement of Tuesday’s planned Brexit vote at the House of Commons, saying the deal “would be rejected by a significant margin”.

But the European Union ruled out renegotiation of the Brexit deal and announced Monday that it would review plans for a no-deal scenario.

“We will not renegotiate the deal, including the backstop, but we are ready to discuss how to facilitate UK ratification,” European Council President Donald Tusk said on Twitter.

“As time is running out, we will also discuss our preparedness for a no-deal scenario,” he said.

The so-called backstop arrangement in the Brexit deal has been widely criticized by the MPs, who fear that it would force the UK to adhere to EU rules, even after its exit from the bloc.

The arrangement is aimed at preventing a "hard border" between Northern Ireland and the Republic of Ireland.

EU leaders are scheduled to meet in Brussels for a two-day summit Thursday and Friday, and Brexit has been added to the agenda.