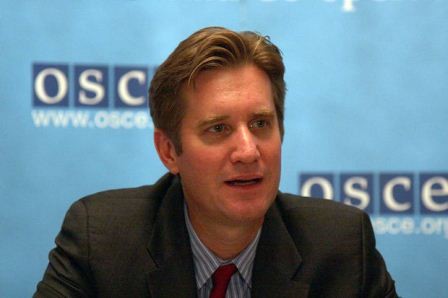 The US is not sidelined by the meeting hosted by Russian President Vladimir Putin in St. Petersburg June 20, since one of the outcomes was that these sorts of high-level meetings would continue in the framework of the Minsk Group, led by its co-chairs, Matthew Bryza, former US co-chair of the Minsk Group, former US ambassador to Azerbaijan, director of the Estonian International Centre for Defense and Security, told APA on June 22.

According to him, the meetings among the presidents of Azerbaijan, Armenia, and Russia appear to have improved the mood between the two South Caucasus presidents and restored the central role of the OSCE Minsk Group in future talks among both the presidents and their foreign ministers.

“Additionally, Presidents Aliyev and Sargsyan pledged at St. Petersburg to ambassador noted implement the measures to reduce military tension along the Line of Contact, which they agreed in their meeting in Vienna on May 16, and to work toward building the atmosphere required to resume negotiations on a political settlement of the Nagorno-Karabakh conflict,” the former ambassador noted.

He said that these are all positive developments with regard to the general mood of relations between Armenia and Azerbaijan, but do not mark substantive achievements in moving toward settlement of the conflict
“Still, the St. Petersburg meeting does appear to have moved the parties to a safer and more stable situation,” Bryza stressed.

According to the former co-chair, President Putin’s motivation appears to be to convey a signal — especially to EU leaders weighing continued sanctions against Moscow -- that Russia is trying to play the role of peacemaker in the South Caucasus, even as it continues to be a war-maker in Ukraine.

He went on to say that the way to resolve the conflict is to finalize the framework that has been on the table since late 2007, the Madrid Document, which defines the Basic Principles of a settlement.

“Engagement by all three presidents of the Minsk Group’s co-chair countries, especially the US president, will be required for this to happen,” he concluded.