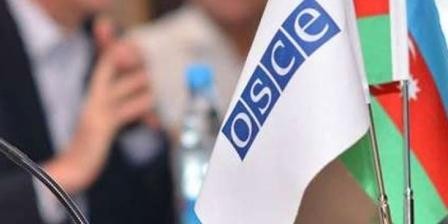 Ongoing violations of the Helsinki Principles, in particular those related to respect for the sovereignty, territorial integrity and inviolability of the internationally recognized borders of the States lies at the core of current crisis of European security, read a statement from Azerbaijan’s Permanent Mission to the OSCE.

The statement was made at the opening session of 2016 Annual Security Review Conference.


According to the statement failure to demonstrate principled position in all protracted conflicts, attempts to misinterpret or selectively apply Helsinki Final Act principles have deeply undermined trust.

Growing number of instances of the threat or use of force, as well as failure to ensure inviolability of internationally recognized borders of the OSCE participating States represent the most serious threat for the European security, read the statement

In the meantime, competition among politico-military and economic blocks within the OSCE area seriously affects European security environment, the statement said.

“In this context, attempts to transform the Organization into an area of competing and opposing political-military groupings are troubling. Such a block-based competition and build-ups put under the question the indivisibility of the OSCE area. Therefore, Azerbaijan remains to be of strong view that the central role of the OSCE in maintaining peace and security in its area should be safeguarded and strengthened,” said the statement.

The permanent mission stressed that Azerbaijan firmly believes that the only way out of current crisis is restoration of unconditional respect for the Principles guiding inter-state relations as enshrined in the Helsinki Final Act.


“Therefore, all OSCE commitments should be equally applied to all participating States without any exception, double standards, geographic or other preferences”, said the document.


In the document, the delegation expressed readiness for open and genuine dialogue with all OSCE participating States in search of durable solutions to problems of European security based on our shared principles, norms and commitments.