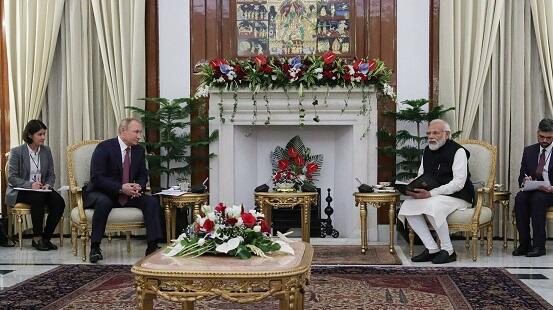 Axar.az reports that, during the visit, Putin will meet with Indian Prime Minister Narendra Modi.

During the talks, the sides are expected to exchange views on topical issues on the international agenda, including joint activities within the G20, BRICS and Shanghai Cooperation Organization, as well as strategic stability, the fight against terrorism, the situation in the Asia-Pacific region and Afghanistan.

The meeting was held at the Hyderabad Palace in the center of New Delhi. This is the first one-on-one meeting of leaders since the talks at the BRICS Summit in Brazil in November 2019.

In the joint document, Russia and India reaffirmed their commitment to the strategic partnership, which is considered a "pillar of global peace and stability."

Putin stressed that relations between the two countries are developing and focused on the future.

Modi, in turn, stressed that the pandemic did not affect the dialogue between the states and the partnership is developing.