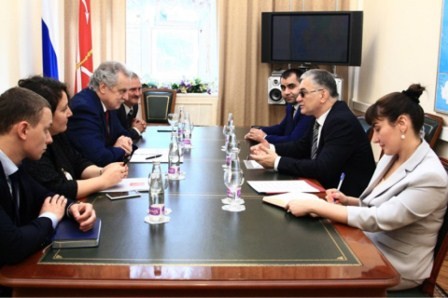 The governments of Azerbaijan and Saint Petersburg have discussed the bilateral cooperation as Consul General Sultan Gasimov met with chairman of the Committee on Foreign Relations of the City Administration Yevgeny Grigoryev in Smolny.

The Consul General spoke of the history of relations between Azerbaijan and Russia, saying the two countries` ties were built on the foundations of good neighbourliness. Gasimov expressed Azerbaijan`s interest in expanding relations with Russia’s regions, including Saint Petersburg.

They discussed a range of issues relating to the development of cooperation, particularly the organization of the first meeting of the Intergovernmental Commission on Economic and Humanitarian Cooperation between the Government of Azerbaijan and Administration of Saint Petersburg, as well as the allocation of an administrative building for the Consulate General of Azerbaijan in the city.

Consul Gasimov underlined the importance of developing cooperation between Azerbaijan and Saint Petersburg in the spheres of tourism and export of agricultural products. “Important changes have taken place in Azerbaijan`s tourism sector thanks to serious reforms implemented by the government.”