Azerbaijan and Iran discussed the cooperation 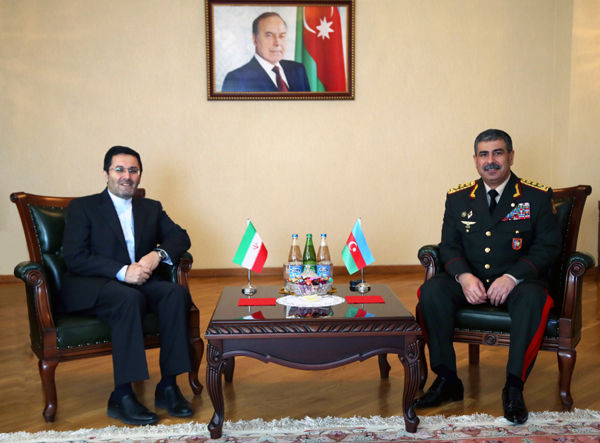 On November 23, Minister of Defence of the Republic of Azerbaijan, Colonel General Zakir Hasanov met with newly appointed Ambassador Extraordinary and Plenipotentiary of the Islamic Republic of Iran to Azerbaijan, Javad Jahangirzadeh.

Minister congratulated the Ambassador on the beginning of diplomatic activity in our country and wished him success in the field of expansion of cooperation between Azerbaijan and Iran.

Defense Minister, stressing that the meetings of leaders play a significant role in the development of the Azerbaijani-Iranian relations, noted that ties in the military sphere are also developing successfully according to the bilateral cooperation plan.

Diplomat, in turn, expressed satisfaction with the beginning of his activity as an Ambassador in a friendly and fraternal Azerbaijan and said that he would make all efforts for the development of the relations between our countries, in particular cooperation in the military sphere.

The Ambassador expressed his satisfaction with the friendly visit of Iranian Naval Forces' ships to Baku at a high level and highlighted the importance of organizing such visits on a reciprocal and intensive basis.

The sides touched upon the prospects of relations in the military sphere, exchanged views on expansion of activities in this area, joint plan development, organizing mutual visits, including the establishment of a joint commission on military-technical cooperation of Defense Ministries of the two countries with the participation of specialists.

The meeting discussed the current state of military cooperation between Azerbaijan and Iran, prospects of relations in the field of military education and military medicine, as well as regional issues.