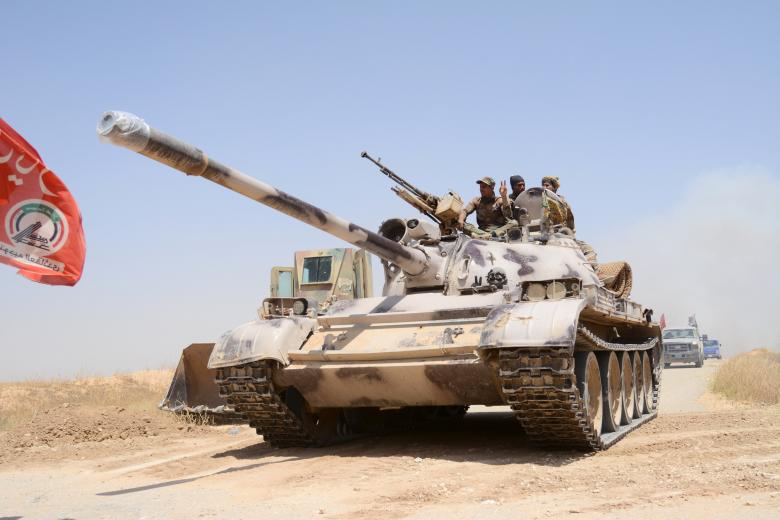 Syrian rebels say the United States and its allies are sending them more arms to try to fend off a new push into the southeast by Iran-backed militias aiming to open an overland supply route between Iraq and Syria.

The stakes are high as Iran seeks to secure its influence from Tehran to Beirut in a "Shi'ite crescent" of Iranian influence through Iraq, Syria and Lebanon, where Sunni Arab states have lost out in power struggles with Iran.

Tensions escalated in the southeastern region of Syria, known as the Badia, this month when government forces supported by Iraqi Shi'ite militias deployed in a challenge to rebels backed by President Bashar al-Assad's enemies.

This has coincided with a march toward the Syrian border by Shi'ite militias from Iraq. They reached the frontier adjoining northern Syria on Monday. A top Iraqi militia commander said a wider operation to take the area from Sunni jihadist Islamic State would start on Tuesday and this would help Syria's army.

While in Iraq the United States has fought alongside Iranian-backed Iraqi government forces and Shi'ite militias against Islamic State, in Syria Washington has lined up against Assad's Iranian-backed government and wants to block a further expansion of Iranian influence, with its regional allies.

The sides are vying for pole position in the next major phase of the fight against Islamic State: the battle to dislodge it from the eastern Syrian province of Deir al-Zor where many of the jihadists have relocated from Raqqa and Mosul.

Several rebel groups fighting under the Free Syrian Army (FSA) banner operate in the sparsely populated Badia, where they captured swathes of territory from Islamic State this year. U.S. air strikes on May 18 targeted Iran-backed fighters who had moved into the area.

Also in May, Damascus declared both the Badia and Deir al-Zor priorities of its campaign to re-establish its rule over Syria, which has been shattered by six years of war that have killed hundreds of thousands of people. The government is being helped by both Iran and Russia, while the opposition has been helped by the West and regional states which oppose Assad.

Rebels said military aid has been boosted through two separate channels: a program backed by the U.S. Central Intelligence Agency (CIA), known as the MOC, and regional states including Jordan and Saudi Arabia, and one run by the Pentagon.

"There has been an increase in the support," said Tlass Salameh, head of the Jaish Usoud al-Sharqiya, one of the FSA groups backed via the CIA-backed program. "There's no way we can let them open the Baghdad-Damascus highway," he said.

A senior commander of a Pentagon-backed group, Maghawir al-Thawra, told Reuters a steady flow of weapons had arrived at their base near the Iraqi border since the pro-Damascus forces began deploying this month.

He said efforts to recruit and train local fighters from Deir al-Zor had accelerated at their garrison at Tanf, on the highway some 20 km (12 miles) from the Iraqi border.

"The equipment and reinforcements come and go daily ... but in the last few weeks they have brought in more heavy military vehicles, TOW (missiles), and armored vehicles," he said, speaking on condition of anonymity.

In a written response to emailed questions from Reuters, a spokesman for the U.S.-led coalition did not say if coalition support to Maghawir al-Thawra had increased.

Colonel Ryan Dillon said coalition forces were "prepared to defend themselves if pro-regime forces refuse to vacate" a de-confliction zone around Tanf.

"The coalition has observed pro-regime forces patrolling in the vicinity of the established de-confliction zone around the Tanf training site in Syria ... Pro-regime patrols and the continued armed and hostile presence of forces inside the ... zone is unacceptable and threatening to coalition forces."

U.S. jets this week dropped leaflets on pro-government forces instructing them to pull out of the Tanf area to the Zaza junction further from the border. The leaflets were obtained by Hammurabi Justice, a Maghawir-linked website.

The Syrian army could not be reached for comment.

A commander in the military alliance fighting in support of Assad told Reuters the deployment of government forces and pro-Damascus Iraqi fighters in the Badia would "obstruct all the plans of the MOC, Jordan and America".

The commander, a non-Syrian, said Assad's enemies were committed to blocking "what they call the (Shi'ite) Crescent". But, he said, "Now, our axis is insistent on this matter and it will be accomplished."

The Iraqi Badr militia said its advance to the Syrian border would help the Syrian army reach the border from the other side. "The Americans will not be allowed to control the border," its leader, Hadi al-Amiri, told al-Mayadeen TV.