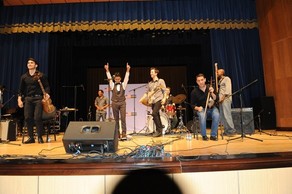 Matuto music band of the United States have performed in Baku.

Embassy’s American Music Envoys Program. Over the next two weeks, Matuto will be giving six free, public concerts throughout Azerbaijan.

Matuto’s electrifying stage show won them a spot at the 2011 Womex World Music Conference in Copenhagen, Denmark. Other honours include a 2012 appointment as U.S. State Department “American Music Ambassadors,” which took them to stages throughout West Africa, North-east Brazil, and Eastern Europe.

Matuto’s music is all about the dance. They perfectly combine Brazilian forró and American bluegrass into an infectious rhythm that immediately gets every audience member moving. Their instruments swirl together, bobbing in and out, whirling around the tension as its core: the push and pull between the Latin syncopation of Brazilian root music and the folk traditions of the American South. It is Americana meets Brazil, an unlikely combination on paper, but on stage it just feels right.

Performing in Azerbaijan for the first time, thanks to sponsorship from the U.S. Embassy, Matuto’s visit will help foster cross-cultural understanding between Americans and Azerbaijanis.

While in Azerbaijan, the group will travel to Baku, Ismayilli, Mingachevir, and Ganja. At each stop they will give public concerts and conduct master classes for local musicians.

All of Matuto’s performances in Azerbaijan are free and open to the public.