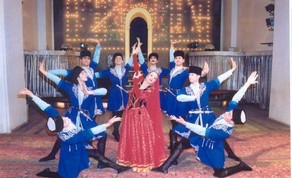 Azerbaijan State Philharmonic Hall named after Muslum Magomayev will host a concert program on the occasion of International Dance Day.

It was told in the philharmonic hall.

Honored Collective Azerbaijan State Song and Dance Ensemble named after Fikrat Amirov will give a performance in the concert.

Artistic director and chief conductor of the ensemble is Aghaverdi Pashayev.