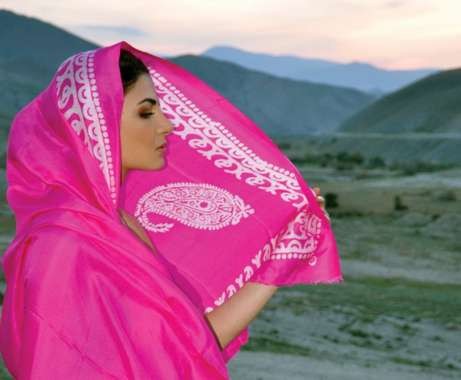 Kelagayi, a unique headscarf of Azerbaijani fair sex, is as beautiful and gentle as women. The silk headscarf, accentuating female beauty even more, was an integral part of Azerbaijani women’s life during many centuries.

Kelagayi is a silk headscarf made from fine and soft silk in a four-cornered shape and with a printed pattern on it. Silk thread is incredibly thin, and unbelievably strong as well ... silk both warms and cools.

This beautiful garment with 2,000-year history enters the UNESCO Cultural Heritage List, thus acquiring even a symbolic meaning thanks to its colors and patterns decorating this piece of folk art.

Azerbaijan, being the largest sericulture region of the Middle East of the 17th century, therefore local masters produced amazing fabrics and silk headscarves surprising with their niceties, thinness, elegance and beauty of patterns.

Azerbaijan’s regions Shamakhi, Ganja, Sheki and Shusha were important centers of production of silk fabrics, so that Italian traveler Marco Polo living in the 13th century, noted the beauty of silk scarves made in Shamakhi and Barda.

It is believed that through color, ornament and tying techniques of kelagayi girls could declare their love, ask for forgiveness, make up a quarrel, or define their social status.

Color also can be selected to suit all tastes. Red kelagayi, for instance, traditionally was put on bride's head.

Adult women preferred to wear kelagayi of darker shades, not to attract attention.

Each region of the country has its own manner of wearing kelagayi. In some places kelagayi was tying over kerchief previously collecting hair with flax. Shawl covered women’s face and surrounded their figure.

Although the days when kelagayi were so popular among women left behind, however, this traditional clothing accessories still please the eye and warm the soul. The tradition of covering head with kelagayi is still preserved in some regions of the country, mostly among older generations of women.

Young girls do not cover their head with kelagayi, and wear them instead of a scarf, beautifully tie it around the neck or cover shoulders as part of the accessory.

Traditionally kelagayis were in the form of a square and regular in size -- 150x150 or 160x160 cm, which was considered as a module, dividing the scarf into four parts, and getting comfortable scarf for everyday wear.
Nowadays kelagayis are made in different sizes including rectangular shape in the form of scarves, or square-shaped but smaller size. Today, the beautiful accessory is imposed both on the local market and abroad, mainly neighboring Iran.

Ornaments for kelagayi are produced by wooden forms or seals, called ghalib, usually made of pear or walnut wood.

There are great varieties of drawings including rose, poppy, narcissus, flowers of fruit trees, etc and all of these patterns take on deeper meaning and are used to transmit certain information while combining into a coherent composition.

Ornament pattern of kelagagis are different in various regions of Azerbaijan. But regardless of pattern applied to kelagayi this traditional scarf will always decorate the image of Azerbaijani women and serve as an example of Azerbaijan folk art.