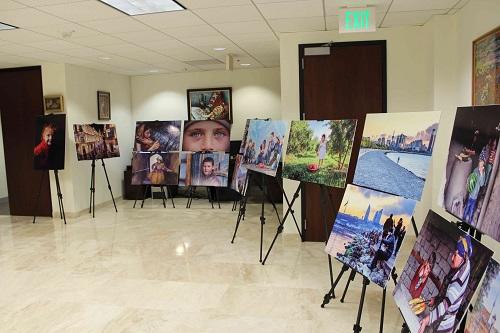 The Consulate General of Azerbaijan in Los Angeles hosted a photography exhibition of award-winning Azerbaijani photographer Etibar Jafarov on April 18, 2019.

Axar.az reports that the event was attended by foreign diplomats, representatives of science and culture, journalists, as well as leaders and members of Azerbaijani, Turkish, Jewish and Iranian communities.

Opening the event titled “Colors of Azerbaijan”, Consul General of Azerbaijan in Los Angeles Nasimi Aghayev welcomed the guests and noted the importance of this cultural event dedicated to April 18 - World Heritage Day. Consul General mentioned that several historical sites in Azerbaijan had been proclaimed the World Heritage Site by UNESCO and they were being demonstrated at this exhibition. Then he introduced photographer Etibar Jafarov to the attendees.

Etibar Jafarov informed the guests about his photography. He also shared funny background stories of some of his photos. Then two time-lapse videos, made of Jafarov’s photos, dedicated to Azerbaijan and showcasing the beauty of its landscape, ancient and modern architecture, its people and traditions, were screened.

The event also featured the performance of Azerbaijani songs by Burak Besir and Dimitris Mahlis.

Following the performance, the guests got acquainted with the exhibition, which was received with much interest and admiration.