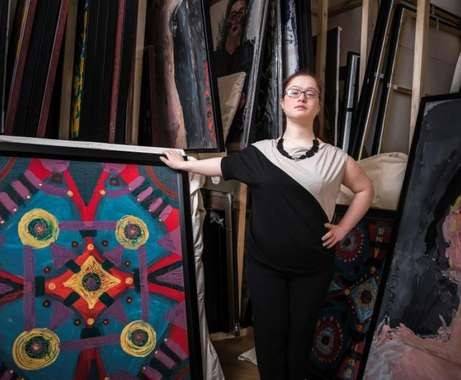 The catalog of works of the talented young Azerbaijani artist Maryam Alekberli was handed over to Vatican’s Ministry of Culture.

The catalog will be stored in the Ministry of Culture of the Holy See.

Vatican's Secretary of the Pontifical Council for Culture Monsignor Sanchez de Toca Alameda stressed that works of the young artist made wonderful impressions and her art imagination admired.

"Rich genetic talent and art abilities of this young girl are delightful. The sanctity coming from works of the young artist whom God has allocated unique talent gives to the viewer purity and cleanness. Bright, warm colors of works reflect innocence and purity of her inner world. These works breathing the paradise atmosphere urge the person to live, being guided by such divine concepts as sanctity, belief, religion, service to God who has created the Universe," said Alameda.

Then, he presented the catalog of works to the Pope.

Alameda noted that he represented Vatican at the first European Games in Baku. He said that he would meet and get closer acquainted with the works of the young artist during her following visit to Vatican.

The official is planning to hold Maryam's exhibition in the Holy See in the near future.

Born in 1991, Alakbarli developed a taste for painting and sculpting at a very early age and got actively involved in children's art to a point that her works went on exhibitions. Her works, including four of her albums, were displayed in Baku, Paris, Istanbul, Ankara, Rome and Moscow.

While suffering from Down's syndrome, lists of her work which mainly characterize educational themes are representative of her zeal and creativity.

Sensing deeply the real world with its problems, Maryam heartily incarnates her works with the warmness of her heart, her subtle perception of reality, although not appreciated in the way she warrants, she shows all the beauty of the world by dints of the language of colors and brush.

Maryam's art works have earned big success both in her motherland Azerbaijan and beyond its borders including Germany, Italy, Russia, Turkey Lithuania and France.

Once, Juliette Binoche, world famous French actress, says, "Maryam has her own vision on the color combination." She shares her feeling of being impressed on the creativity of the young artist by stating that "Rose-red, yellow and brown tint, bright green, bloody red, black as antimony - she boldly works with these colors, like the nature creating the bright and harmonious world."

Earlier in 2013, "Colours of the Soul", a catalogue which features paintings of Maryam including her approval and appraisal by other artists, came out.

The colorfully illustrated catalogue, which was printed by the publishing house Sharq-Qarb, has published a complete series of the talented painter's light work.