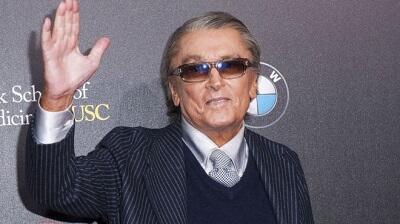 Robert Evans, the larger-than-life producer and studio executive whose films included Chinatown and The Cotton Club, has died at the age of 89.

The former actor, whose seven wives included actress Ali McGraw, authored an autobiography, The Kid Stays in the Picture, that itself inspired a film.

As head of production of Paramount, he was key to the making of the first two films in the Godfather series.

His other credits include Urban Cowboy and the notorious 1980 flop Popeye.

Born Robert J Shapera in 1930, Evans started out as an actor and was cast as a bullfighter in 1957's The Sun Also Rises.

He went on to become head of production at Paramount, overseeing such hits as Rosemary's Baby and Love Story.

"The producer is the most important element of a film," he once declared. "He's on a film for four or five years and gets very little credit for it."

His death was confirmed by his publicist Monique Moss, who said the Evans family had yet to issue a statement.