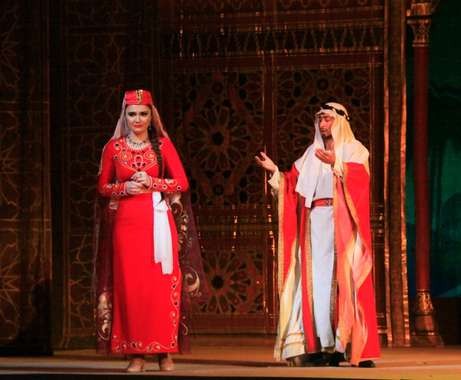 Azerbaijan’s State Theatre of Young Spectators has begun rehearsals of a new play based on Fuzuli's Leyli and Majnun poem.

The director and the author of staging is honored artist of Azerbaijan Nijat Kazimov, art director is Elnur Akhundov, music is by Hamid Kazimzadeh, stunt choreographer is Isa Asadov, director is Mushfig Aliyev, and an assistant director is Gunay Gasimova.

The premiere is scheduled for the beginning of 89th theatre season.

"Leyli and Majnun" - tells the story of love of young man Gacy, nicknamed "Majnun" (Madman) to the beauty of Layla. This poem is considered the pinnacle of creativity of Fizuli. Based on the poem, in 1907 Uzeyir Hajibeyli wrote the first Azerbaijani Opera "Leyli and Majnun"

The opera is based on traditional Azerbaijani mughams, which are performed in their original form - meaning unwritten and improvised. Entire segments of the opera feature specific mughams, depending on the emotional effect the composer was trying to convey. The mughams called Mahur-Hindi, Segah, Chahargah, Kurd-Shahnaz, Bayati-Shiraz, Shushtar, Bayati-Kurd, Shabi-Hijran and Gatar are among those featured in the opera.