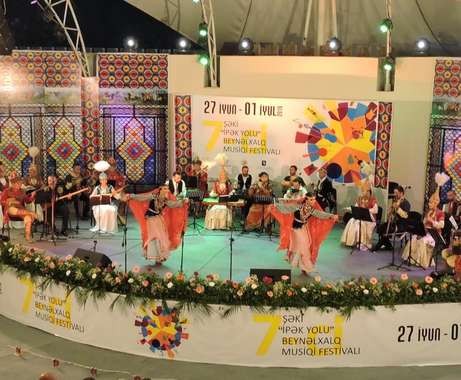 A ceremonial opening of the 7th international Silk Way music festival has been held in Azerbaijan’s Sheki region, the Cultural Capital of the Turkic World 2016.

The ceremony took place at the Sheki Summer Theatre with participation of the Orchestra of Folk Instruments of TURKSOY. The orchestra which is composed of singers from Azerbaijan, Turkey, Uzbekistan, Moldova, Kyrgyzstan, Kazakhstan, Mongolia, Turkmenistan and Russia performed musical patterns of different nations.

Speaking at the opening ceremony, deputy chief of executive powers of Sheki Zarina Javadova, and chairman of the Composers’ Union Firangiz Alizada stressed that this festival is held in Sheki not by accident and this is connected with the history of an ancient city.

The festival is accompanied by concerts of the ensemble Şimdi, Anatolian dance group (Turkey), ensemble Vas-Liqa (Japan) and Sahil (Iran) will be held in the Palace of Shaki Khans, the Summer Theatre as well as the historical complex Yukhari Karvansaray on June 28-30.

Further, the publications "Musical folklore Sheki" and "Sheki Performing arts " will be presented at Sheki Music College on June 30. The publications which cover musical traditions of the region have been written by musicologist Saadat Texmirazkizi.

The meeting with artistic director and chief conductor of Azerbaijan State Orchestra of Folk Instruments, Agaverdi Pashayev will be held on July 1. The event is dedicated to the 80th anniversary the folk orchestra.

The closing ceremony will feature the performance of Azerbaijan State Orchestra of Folk Instruments and the State Song and Dance Ensemble on July 4.

Holding such a grand music festival, which has become a wonderful tradition, in Sheki, is not by mere chance.

For centuries this beautiful city, which is located along the route of the ancient Silk Road, was an important center of art and commerce.

Today Sheki is a unique place that has preserved the culture of urban planning inherent to medieval towns.