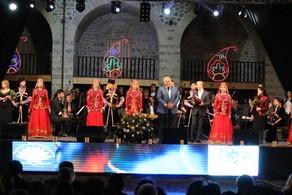 It was told in the Department of Information and Public Relations of the Ministry of Culture and Tourism.

On the opening day of the festival there will be a concert of the ensemble of folk instruments of TURKSOY in the hall of Sheki summer theater. The concert, which is a joint project of artists of Azerbaijan, Turkey, Uzbekistan, Moldova, Tatarstan, Bashkortostan, Mongolia, Kyrgyzstan, Kazakhstan, Sakha (Yakutia), Tuva and Turkmenistan, includes works of different nations.

The second day of the festival will be completely dedicated to performances of Turkish music groups.

The final concert will take place on the last day of the festival.

Notably, the festival is being held since 2010.