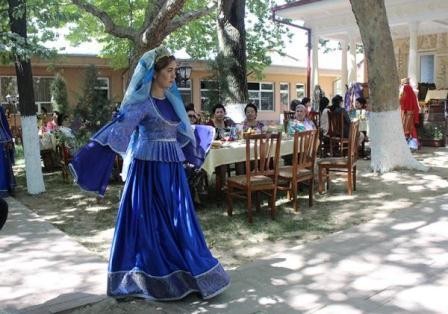 According to the press secretariat of Azerbaijan's Ministry of Culture, Azerbaijani national clothes of Karabakh were shown on an international fashion exhibition in Uzbekistan's Qibray. The event was dedicated to 25th anniversary of Uzbekistan's independence from the USSR.

The collection was made by Zarqaynar Fasion House in Tashkent. It was presented with support of Heydar Aliyev Centre and Azerbaijan's embassy in Uzbekistan.

The collection consisted of traditional holyday clothes for males and females in XVII-XIX centuries' traditions, including wedding and holiday dresses and Karabakh aristocrat ladies' dresses. The presentation was accompanied with Azerbaijani national music Yellow Bride (Sarı Gəlin). Information about traditions of the Karabakh region of Azerbaijan and national sweets were also presented.