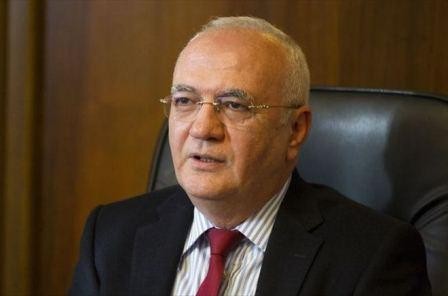 Azerbaijan and Turkey have a great potential to increase the bilateral trade turnover to $15 billion, Turkey's Economy Minister Mustafa Elitas said in an exclusive interview with Trend on April 28.

"The trade turnover between Azerbaijan and Turkey increased eight times and stood at $5.1 billion in 2002-2014, but it slightly dropped due to the global financial crisis in 2015 as compared to the previous years," said the minister.

Turkey's export to Azerbaijan stood at $1.9 billion in 2015, while the country's import from Azerbaijan totalled $1.6 billion.

The minister believes that one of the most important missions of Turkish companies is to contribute to the development of Azerbaijan's economy.

"Turkey's investments in Azerbaijan reached $7.5 billion by late 2014, while the volume of investments made by Azerbaijan in Turkey's economy stand at $4.2 billion," said Elitas.

These figures show the level of relations between the two countries, according to the Turkish minister.
"But Baku and Ankara should even more develop the bilateral relations," he added.