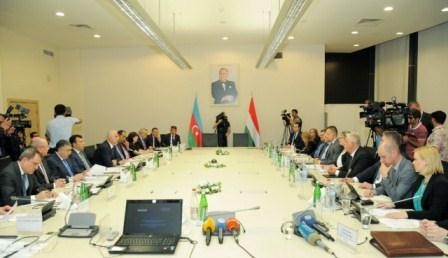 The sixth meeting of the Azerbaijan-Hungary Intergovernmental Commission on Economic Cooperation has been held in Baku.

Azerbaijani co-chair of the commission, minister of economy Shahin Mustafayev said the two countries have signed 40 documents. The minister noted that the trade turnover between the two countries rose 63% year-on-year. According to him, 6 Hungarian companies operate in Azerbaijan.

Hungarian co-chairman of the commission, the Foreign Minister Peter Szijjarto said Hungary is interested in expansion of ties between Azerbaijan and EU.

He stressed Hungary has practice in agriculture and is interested in expansion of agricultural cooperation with Azerbaijan.

The fifth meeting of Azerbaijan-Hungary intergovernmental commission was held in April 2015 in Budapest. During that meeting, the parties signed a protocol, in accordance with which they agreed to expand the cooperation in making investments, industry, energy, tourism, agriculture, trade, environmental protection, water industry, ICT, culture, sports, science and so on.

Trade turnover between Azerbaijan and Hungary stood at $15.56 million in the first five months of 2016, and $14.74 million of this amount accounted for the import of Hungarian products.