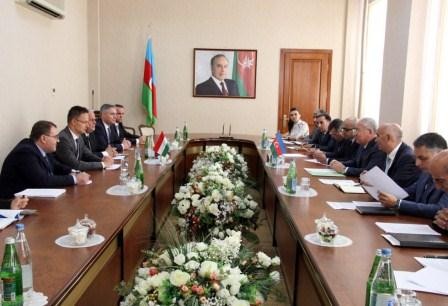 Azerbaijan and Hungary have discussed how to develop agricultural cooperation as Azerbaijani Minister of Agriculture Heydar Asadov met with Hungarian Minister of Foreign Affairs and Trade, co-chair of the Joint Intergovernmental Commission on Economic Cooperation Peter Szijjarto.

Minister Asadov hailed economic relations between Azerbaijan and Hungary. He noted the role of his May visit to Hungary in developing the two countries` relations in agricultural sphere.

Hungarian minister Szijjarto praised “dynamic” development of economic relations between the two countries. He expressed confidence that agreements signed between the President of Azerbaijan and the Hungarian Prime Minister would contribute to the expansion of agricultural cooperation.

He highlighted the creation of a joint seed fund, Hungary`s technical assistance to sheep breeding, expansion of cooperation between agricultural research and educational institutions, import of cattle from Hungary to Azerbaijan.

Szijjarto also stressed the importance of cooperation in the sphere of food safety.

He invited the rector of Azerbaijan State Agricultural University to Hungary with the aim of developing relations in the fields of science and education.