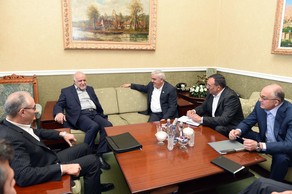 Today, President of the State Oil Company of Azerbaijan Republic (SOCAR) Rovnag Abdullayev and Iranian Oil Minister Bijan Namdar Zangeneh have met at the company's head office, it was told in the press service of SOCAR.

R.Abdullayev said that relations between Azerbaijan and Iran are developing rapidly and with great success as well as important steps are being taken towards development of the relations between the two countries after the official visit of Azerbaijani President Ilham Aliyev to Iran in February this year.

Expressing his confidence that Iranian President Hassan Rouhani's official visit to Azerbaijan, which started yesterday, will be a new stage in further development of these relations, R.Abdullayev stressed recent intensification of the relations between SOCAR and Iranian oil and gas companies.

Iranian Oil Minister expressed great importance on expansion of the relations with neighboring countries, especially with Azerbaijan as well as on necessity of expansion of economic relations in this context, including in the energy sector. The sides also discussed the possibilities of cooperation in areas of mutual interest.

SOCAR President Rovnag Abdullayev recalled his visit to Iran in November last year and January this year as well as visits of the heads of Iranian oil and gas sector to Azerbaijan and said that these visits serve to deepening and expanding of economic cooperation between the two countries and welfare of Iranian and Azerbaijani peoples.

In the meeting, the sides exchanged views on the issues of mutual interest.