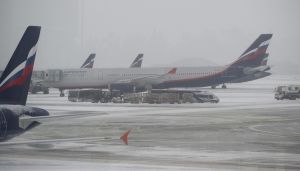 On Saturday, December 17, two Airbus A321 encountered in the capital’s Sheremetyevo airport: the accident happened when towing one aircraft, the other liner at that time stood on the platform.

Axar.az informs, two aircraft touched each other’s wings. The aircraft at the time of the incident there were no passengers or crew members. The ships damaged fairings and flaps. After an incident, both aircraft were delivered to the Parking lot. The departures of these flights postponed for a while.

Recall now an emergency has occurred in another Moscow airport: the pilot took off from Domodedovo aircraft lost consciousness in connection with what the second pilot had to return the liner to the air Harbor. During the emergency landing anybody from passengers has not suffered.

It later emerged that the pilot who became ill, died, never regaining consciousness . The commander of the aircraft was in the prestigious database of pilots. It includes the pilots who have attained or exceeded the high educational level.