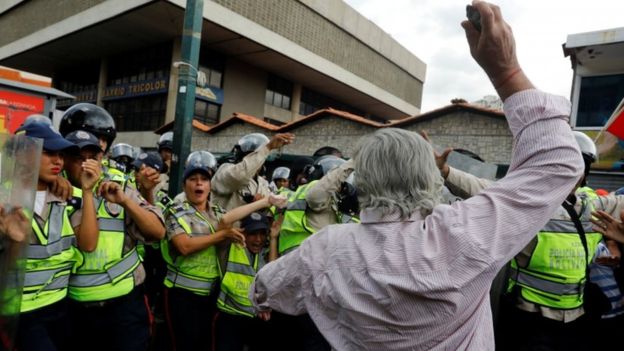 Thousands of elderly Venezuelans have taken to the streets of Caracas and other cities to protest against the government of Nicolas Maduro amid a worsening economic crisis.

Axar.az reports citing to BBC police blocked access to a main road in the capital and used pepper spray to try to control the crowd.

Protesters threw punches and demanded respect from police.
Venezuela is facing a shortage of many basic items, including medicines and medical equipment.
Many feel that elderly people have been particularly affected by the crisis in the health system.

In another development, Mr Maduro has sacked his health minister after she released official figures showing a sharp rise in child mortality and maternal deaths over the past two years.

Antonieta Caporale, a gynaecologist, had been in the post for only four months and was replaced by the Vice-Minister of Hospitals, Luis López.