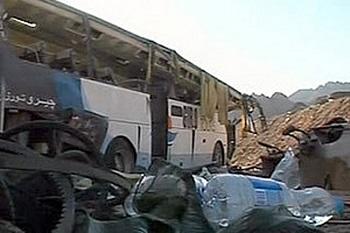 The blast occurred in the city of Cairo on Friday.

The vehicle carrying tourists reportedly blew up near the Giza pyramid complex. Addressing the incident, the Egyptian Interior Ministry has stated that two Vietnamese tourists were killed and 10 wounded, adding that the blast had been caused by an improvised explosive device.

"At 18.15 local time (16.15 GMT), an improvised explosive device exploded near the wall during as a bus with 14 Vietnamese tourists on El Marizou Street in El Giza passed by, causing the deaths of two and wounding 10 tourists, as well as two Egyptians — a guide and a bus driver. The police forces have left to go to the scene, the circumstances are being clarified", the ministry said.

According to Sky News Arabia, the blast occurred amid a tightening of security measures in important locations of the Egyptian capital.