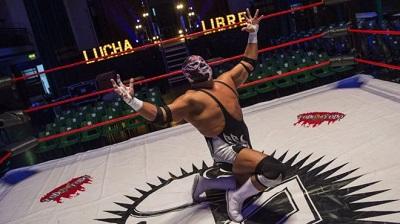 A professional wrestler and actor has died after collapsing during a bout in London.

Cesar Barron, known as Silver King, was a star in his native Mexico and appeared alongside the comic actor Jack Black in the 2005 film Nacho Libre.

The 51-year-old was performing at the Roundhouse in Camden when he fell to the canvas.

A fellow Mexican wrestler paid tribute to his "great rival", saying: "He went as he wanted: fighting!"

El Hijo del Santo, aka Jorge Rodriguez, tweeted his "deep regret" at the death of his "partner in so many battles".