Flying UFO through the sky - Photos 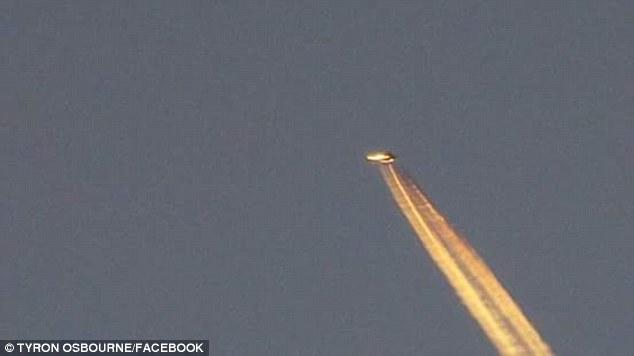 A musician has claimed to have seen a flaming UFO flying through the sky.

Axar.az reports that, Mark Emmins was stunned when he saw the fiery object soaring above Exmouth in Devon.
Mr Emmins said he first noticed the oval-shaped luminous craft at around 1pm on Wednesday - but it was still floating above around three hours later.
His quick-thinking friend Tyron Osborne, grabbed his camera and snapped the bizarre sight as the pair stared open-mouthed at what they believe was an alien spaceship.
Sharing pictures, Mr Emmins wrote: 'Today for the second time in my life I can honestly say that myself and my neighbour watched a UFO.

'It was stood still in the sky for some hours and then decided to move and then vanish. We got photos too.'

Mr Emmins said he originally thought the object looked like a 'bent cloud', but he then noticed the skies were clear. 'I didn't expect it to actually happen.'
The object traveled eastward from Dawlish, leaving Mr Osborne to speculate it may have crossed the Atlantic from the U.S.A.
He added: 'These pictures can, and do, tell a million stories.
Photos of the alleged UFO sighting have caused mass debate on Mr Emmins' Facebook page, with some suggesting that the incident could have been caused by a launch from Her Majesty's Naval Base Devonport, in Plymouth.
Mickie Owen wrote: 'Probably some new type of sick military weaponry originating from the nearby Plymouth Naval base.' However, others have their own theories.