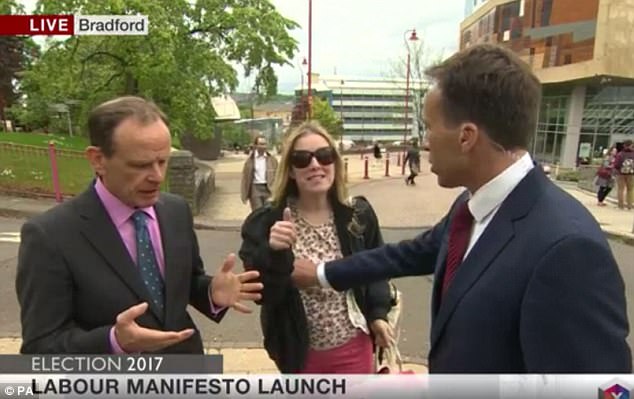 This is the bizarre moment a BBC presenter accidentally touches a Jeremy Corbyn supporter's breast as she interrupts his broadcast.

News anchor Ben Brown was speaking to his colleague, assistant political editor Norman Smith, about the launch of the Labour Party election manifesto in Bradford when the men were interrupted by a member of the public.

The woman, who was carrying several bags and wearing a leopard print top and black jacket, stood between the pair and said: 'Absolutely fantastic.'

But she was quickly brushed aside by Brown, whose right hand appeared to touch her chest as he tried to move her out of shot - with the woman subsequently hitting him.

The as-yet unnamed woman slapped him on the shoulder before walking off across camera.

As the video of the incident went viral on the internet, Cameraman Jason Farrington said: 'Bit of a boob by Ben Brown...'
Steve Hunter joked: ‘Clearly Ben Brown felt a right tit after this blunder. Etc etc.’

Brown later tried to explain his actions on social media and told his 5,900 Twitter followers he did not mean to touch the woman's breast.