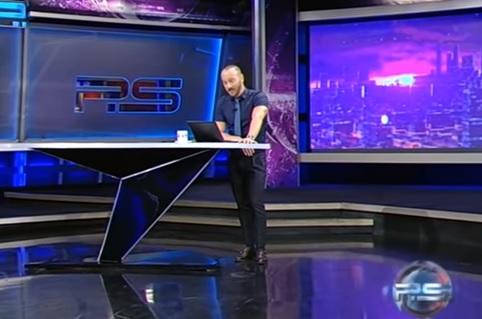 Lead author of the program on the Georgian TV channel “Rustavi 2” Giorgi Gabunia in the Russian language addressed to the President of Russia Vladimir Putin, in his speeches abundantly present profanity, the most “cultural” of which was “occupier” and “miserable creature”.

“TV healthy person. Not filthy oligarchs and Russian agents. “Rustavi 2″. The Georgian TV company. Broadcasting from Tbilisi, covers 85% of the population. Outside of Georgia is in Europe and the middle East”,signed Vitauskasсвой post.

Blog readers generally supported a Georgian journalist: “Tough, but fair, Bravo — Gabunia! Bravo — Rustavi 2! I love you!”, “It is time for the whole world so, familiarising and to attend already got”.

Some users condemned the obscene remarks live: “Rude. And — went. And yet, this is anything but journalism. I FOR Georgians and Ukrainians, if anyone need to expound”, “This “speech” is very risky, knowing the vulnerability of man.’ Undue risk for the whole country.”

In turn, the President of Georgia Salome Zurabishvili has condemned the “verbal aggression” lead, but an apology abstained.

“The statement is contrary to all Georgian traditions, serves only to split and increasing tensions in the country, with Russia and the region“, — she wrote.

Prime Minister Mamuka Bakhtadze more radically condemned the broadcaster, calling the statements of the presenter “a hideous provocative act and an attempt to destabilize the country”.

Whatever we have observed today on Rustavi2 is nothing but disgusting act of provocation and an attempt to destabilize our country. Something that is totally ending! — Mamuka Bakhtadze (@BakhtadzeMamuka) 7 July 2019.

At the same time the General Director of TV company “Rustavi 2” Niko Gvaramia, condemning swearing in the author’s program Gabunia noted that he fully agrees with the pathos of the statement Gabunia and does not intend to apologize for the Mat to address Putin. In addition, he called “an attempt at interference in the Affairs of the TV channel” and “attempt at censorship” statement by the Prime Minister and other authorities that the authority considers this incident as a “destabilization attempt” and “will not leave this without a response”.

Recall that a few years ago the MP from the faction “Block of Petro Poroshenko” Oleg Barna during a speech from the parliamentary rostrum addressed to colleagues with the appeal to legitimize obscene expression against the President of the Russian Federation Vladimir Putin.

As previously reported “FACTS”, in Russia itself, the shaman from Yakutia Alexander Gabyshev 4 months runs along the far East slopes in the direction of Moscow, where in the 2021 plan to banish Vladimir Putin. Thus the President of the country he calls the “demon blood”, “dictator” and “fascist power”.