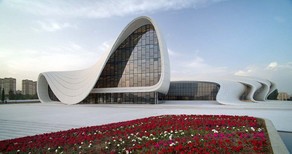 5th Baku International Humanitarian Forum kickes off in the capital of Azerbaijan.

Six round tables will be held within the framework of the event with the participation of the outstanding representatives of political, scientific and cultural elite of the various countries.

The President of Azerbaijan İlham Aliyev is attending the official opening of the Forum.

President of the Russian Federation Vladimir Putin and UN leadership address to the Forum participants, speeches by the Director General of ISESCO H.E. Abdulaziz Othman Altwaijri and the Deputy Director General of UNESCO Getachew Engida are expected.

The Forum 2016 will feature roundtable meetings on the following topics

Different Models of Multiculturalism: from Theory to Humanitarian Practice; the Importance of Preserving the Human Capital in Conditions of Mass Migration as a Basis for Sustainable Development; Transforming of Journalism for the Information Age and its Role in Ensuring Inter-Civilizational Dialogue; Sustainable Development and Ecological Civilization; Molecular Biology, Biophysics, Biotechnology and Issues of Personnel Training in Modern Medicine: Innovative and Ethical Problems; Converging Technologies and Predictions for the Future: the Main Challenges of the 21st Century will be discussed at the forum.

Baku International Humanitarian Forum is an annual event of famous representatives of political scientific and cultural elite of the world community including famous statesmen, Nobel Prize’s winners in the various fields of science and leaders of influential international organizations whose aim is holding dialogues, discussions and exchange of views on wide range of global issues in the interest of all humanity.

The initiators of the Forum in 2010 were the President of Azerbaijan Ilham Aliyev and former President of Russia Dmitry Medvedev.