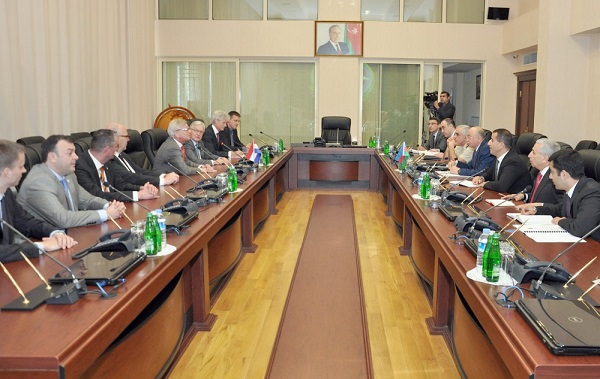 Azerbaijani Minister of Emergency Situations Kemaleddin Heydarov received the delegation led by former President of the Senate of the Kingdom of the Netherlands, chairman of the Dutch Friends of Azerbaijan Group Rene van der Linden May 18.

Axar.az reports citing APA news agency that Minister Kemaleddin Heydarov gave detailed information about the works carried out towards the prevention of emergencies, elimination of their consequences, as well as management of water resources in the country and noted the importance of cooperation with relevant bodies of the Kingdom of the Netherlands.

The “Memorandum of Understanding on cooperation on water resources management between the Ministry of Emergency Situations of the Republic of Azerbaijan and Ministry of Infrastructure and the Environment of the Kingdom of the Netherlands” signed in 2014 was an important step in the development of mutually beneficial cooperation. Works in water resources management are almost completed and efforts within the joint project are underway.

Rene van der Linden said that there are massive prospects for cooperation between Azerbaijani Ministry of Emergency Situations and relevant Dutch bodies.