Embassy of Romania organized a roundtable 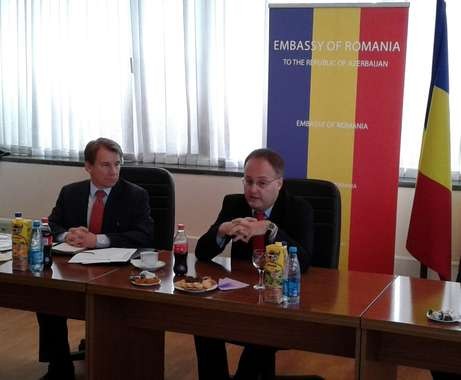 Embassy of Romania, which fulfills the mandate of NATO Contact Point Embassy in the Republic of Azerbaijan for the fourth time in a row, organized a roundtable on “NATO-Azerbaijan partnership: current state of affairs and perspectives” on April 15.

The event was attended by ambassadors, Defence Attaches and senior diplomats from Embassies of NATO countries in Baku and NATO Liaison Office for South Caucasus.

Opening the roundtable Romanian Ambassador to Azerbaijan Daniel Cristian Ciobanu underlined that South Caucasus region has a strategic importance for North-Atlantic Alliance. Baku is a very important and highly valued partner for NATO.

During the visit he also delivered two lectures at Nakhchivan State University and at Nakhchivan University on main elements of NATO relations with Azerbaijan in the light of NATO Warsaw Summit (July 8-9).

These two lectures, at which participated a large public (including local officials, teachers, students and journalists), were part of Embassy’s public diplomacy campaign aiming to raise awareness among the Azerbaijani young generation towards NATO’s values and principles. Ambassador Ciobanu stressed that Azerbaijan is a country of pivotal importance for Europe’s energy security and offers, at the same time, huge opportunities in the field of freight transport. Embassy of Romania in Baku will continue its efforts for promoting the benefits of NATO-Azerbaijan partnership through organizing different public diplomacy activities (including conferences, roundtables and seminars).

Romania, which has been the second country in the world to recognize independence of Azerbaijan and established in 2009 a strategic partnership with Baku, strongly supports the strengthening and deepening of NATO-Azerbaijan relations.

NATO Liaison Officer for South Caucasus Mr. William Lahue presented the latest developments in NATO policy regarding Azerbaijan. He mentioned that today had a meeting at the Department of International Military Cooperation of the Ministry of Defence of the Republic of Azerbaijan regarding the security situation in the region.

Participants in the roundtable exchanged opinions on the positive experience of NATO-Azerbaijan cooperation.