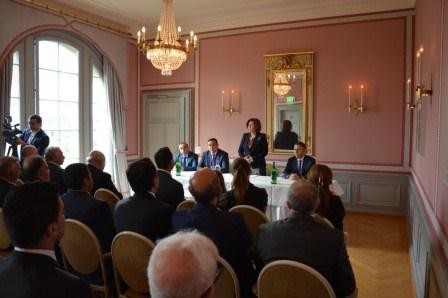 An Azerbaijani delegation led by Deputy Speaker of the Parliament Bahar Muradova has paid a working visit to Switzerland.

Ms. Muradova has met President of the Council of States in the Swiss Parliament Raphael Comte. The Deputy Speaker spoke about the recent events on the line of the contacts of Armenian and Azerbaijani troops, as well as current state in the conflict zone and the country`s expectations from Switzerland.

Raphael Comte said his country supported the settlement of the Armenia-Azerbaijan, Nagorno-Karabakh conflict within the norms of international law.

The sides exchanged views on relations between the two countries in political, economic and humanitarian fields.

The Azerbaijani delegation has also met Chairman of the foreign Policy Committee of the Cantons` Council Christian Levrat. They discussed the Armenia-Azerbaijan, Nagorno-Karabakh conflict, as well as cooperation between the parliaments of both countries.

Yves Rossier, in turn, said Switzerland supports the settlement of the conflict within the norms of international law and the documents of the international organizations.

The Parliamentary delegation has also met compatriots living and studying in Switzerland, as well as heads of the Turkish Diaspora organizations.

The representatives of the Diaspora organizations were informed about relations between Azerbaijan, and Switzerland.

Azerbaijan`s Deputy Parliament Speaker Bahar Muradova was interviewed by the Media of Switzerland.