FM of Azerbaijan releases the statement 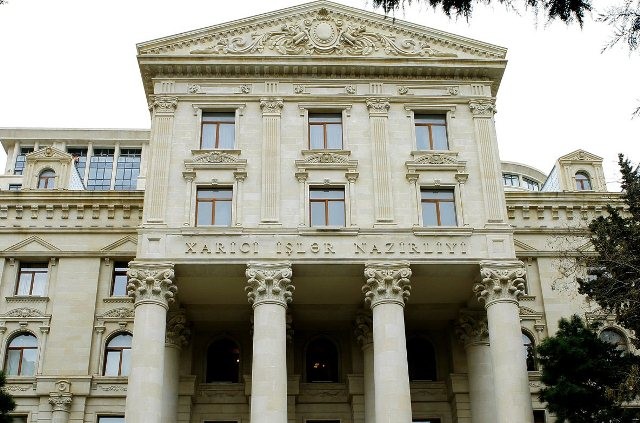 Azerbaijan urges the international community to condemn Armenia for blatant violation of international law, says in the statement released by Ministry of Foreign Affairs of Azerbaijan.

"The ongoing armed conflict in and around the Nagorno-Karabakh region of the Republic of Azerbaijan has resulted in the occupation of almost one fifth of the territory of Azerbaijan and has made approximately one out of every nine persons in the country an internally displaced person or a refugee. The Republic of Armenia bears the responsibility for unleashing the war and using force against Azerbaijan, occupying its territories, carrying out ethnic cleansing on a massive scale and committing other serious crimes during the conflict.

The international community has consistently deplored, in the strongest terms, the use of military force against Azerbaijan and the resulting occupation of its territories. In 1993, the United Nations Security Council adopted resolutions 822 (1993), 853 (1993), 874 (1993) and 884 (1993), condemning the use of force against Azerbaijan and occupation of its territories and reaffirming the sovereignty and territorial integrity of Azerbaijan and the inviolability of its internationally recognized borders. In those resolutions, the Security Council reaffirmed that the Nagorno-Karabakh region is part of Azerbaijan and called for immediate, complete and unconditional withdrawal of the occupying forces from all occupied territories of Azerbaijan. Other international organizations have adopted a similar position.

In total disregard of the position of the international community and in flagrant violation of international law, Armenia continues to undertake efforts aimed at further consolidating the current status quo of the occupation, strengthening its military build-up in the seized territories, changing their demographic, cultural and physical character and preventing the hundreds of thousands of Azerbaijani forcibly displaced persons from returning to their homes and properties in those areas.

Moreover, regular ceasefire violations, attacks on the towns and villages in Azerbaijan situated along the line of contact of the armed forces of Armenia and Azerbaijan and the border between the two States have become more frequent and violent in recent times, resulting in the killing and injuring of Azerbaijani civilians. The Republic of Azerbaijan has repeatedly brought its strong protests and serious concerns in that regard to the attention of the international community and has made it clear on numerous occasions that the unlawful presence of the armed forces of Armenia in the occupied territories of Azerbaijan is the main cause of tensions and incidents in the conflict zone and the major impediment to the political settlement of the conflict. The Republic of Azerbaijan has also repeatedly stated that the military occupation of its territories does not represent a solution and will never produce a political outcome desired by Armenia.

Starting from the early morning of April 2, 2016, the armed forces of Armenia increased fighting from their positions in the occupied territories, subjecting the armed forces of Azerbaijan along the line of contact and the adjacent densely populated areas under control of Azerbaijan to intensive fire with heavy artillery and large-caliber weapons. As a result of Armenia’s attacks and subsequent hostilities, 34 towns and villages along the line of contact were shelled, a number of Azerbaijani civilians, including children, were killed and wounded. Substantial damages were inflicted upon the private and public property. Thus, 353 civilian buildings, among them 314 residential houses, 3 schools, 3 kindergartens, 1 cultural center and other civilian objects were either destroyed or damaged. Furthermore, 357 electricity poles, 3 power substations, 30 transformers, as well as water reservoirs, gas pipelines, roads and other property were damaged. An updated information on the consequences of attacks by the armed forces of Armenia as of 18 April 2016 is attached.

Armenia’s offensive actions also caused casualties and injuries among the servicemen of the armed forces of Azerbaijan. On 10 April 2016, the International Committee of the Red Cross facilitated the handover, between the sides, of the bodies of those killed in action following the recent escalation. Subsequently performed forensic medical examination registered numerous signs of post-mortem mutilation of the bodies of Azerbaijani servicemen.

By its deliberate offensive actions, Armenia undermined the ceasefire regime established in 1994 and endangered the prospects of the political settlement of the conflict. On 5 April 2016 in Moscow, under the mediation efforts of the Russian Federation, the ceasefire was agreed between Armenia and Azerbaijan. Despite that, Armenia continues to violate that agreement by firing at the positions of the armed forces of Azerbaijan and the towns and villages situated along the line of contact with the use of large-caliber machine guns, mortars, grenade launchers and artillery systems.

Alongside the Republic of Armenia’s responsibility as a State for internationally wrongful acts, violations by Armenia of international humanitarian and human rights law during the conflict amount to crimes under international criminal law. The overall assessment of the causes and consequences of the war unleashed by Armenia against Azerbaijan make it absolutely clear that the crimes committed by Armenia during the conflict were not isolated or sporadic acts, but were part of Armenia’s widespread and systematic policy and practice of atrocities. The Republic of Azerbaijan is confident that the consistent measures being taken at the national level, as well as the existing international legal framework, will serve to bring to justice those responsible for the grave offences committed in the course of Armenia’s aggression against Azerbaijan.