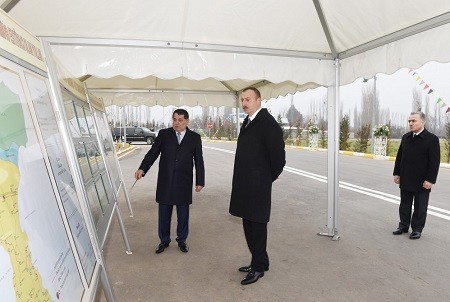 As part of his visit to Tovuz district, President of the Republic of Azerbaijan Ilham Aliyev has attended the opening of the Youth House in the city of Qovlar

The President cut the ribbon symbolizing the opening of the building.

The head of state was informed about the work done in Qovlar city park.

Minister of Youth and Sports Azad Rahimov informed the Azerbaijani President that the four-storey building of the Youth House occupies an area of 4,400 square meters. The facility is one of the biggest youth houses in the country. Photo stands reflecting public and political activities of national leader Heydar Aliyev and President Ilham Aliyev, their visits to Tovuz, as well as their meetings with youth were installed in the foyer of the building.

The Youth House has intellectual clubs, a lab, an electronic library, a dancing hall, a 120-seat auditorium, a 36-seat assembly hall, as well as billiard, tennis and fitness halls. It will provide sewing, knitting and computer courses.